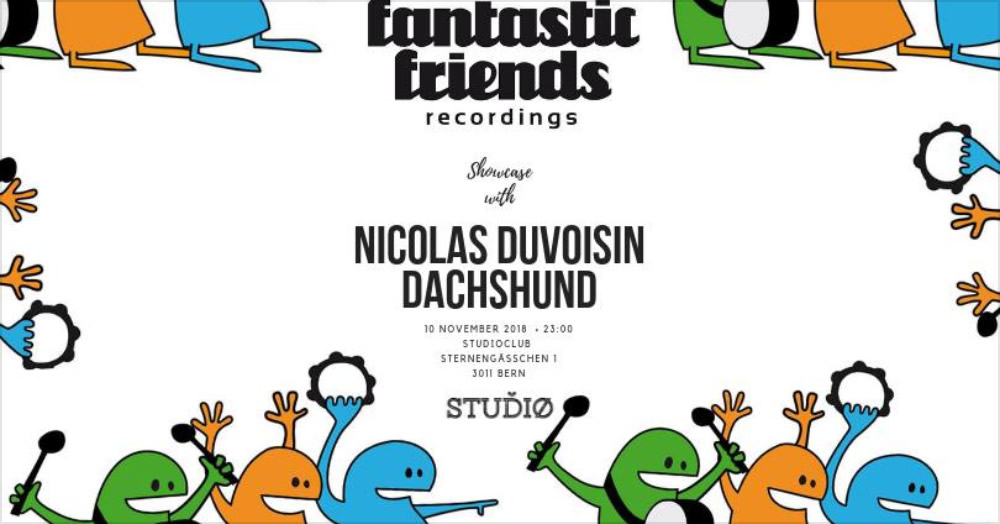 A label managed by Nicolas Duvoisin, Fantastic Friends Recordings is a reflection of the experiences he has nurtured in of his last years in the electronic music scene and more specifically, his time as head of Plastic Fantastic record shop in Geneva.

Open to all and oscillating between house and techno, Fantastic Friends recordings aims to hit the dance floors with quality productions. The label will be diffused both in vinyl and digital releases. The first release came out in October 2009 and it has been stronger ever since.

Dachshund was born and raised in Geneva, Switzerland. He got his first introduction to music in the 90’s, playing guitar in Reggae bands. That was the beginning of his long lasting love story with dub music. Among other bands, his collaboration with The Restless Mashaits lead him to Downtown Kingston Jamaica in 1995, where he mixed instrumentals recorded in Switzerland on 2 inch tapes with Jamaican musicians recorded onsite. Jamaica was a revelation to Dachshund.

There, he witnessed the work of Jamaican sound engineers who were transforming reggae mixes into Dub tracks full of incredible sound effects. Dub is undoubtedly Dachshund’s first musical influence and inspiration. He produced his own Dub music in the following years, at the same time learning about every piece of studio equipment. This part of his musical experience can still be heard today in such productions as “+ 91 ahead” (Plak records) or “V2E” (Sthlmaudio records). With his roots in Dub music, Dachshund first experimented with electronic music in 1997, producing his own jungle and Drum’n’Bass tracks.

This new orientation got him involved in DJing and organizing the first Drum’n’Bass parties in his hometown. In order to play his own music during DJ sets –CDs not being available at that time – he cut his own productions on vinyl (dub plates) at Music House in London. It’s through these new styles of music that Dachshund developed his knowledge of hardware machines. Naturally, his interest soon turned towards DJing and producing club music. There is no better way to understand a musician than through the common thread that ties together all his different music love affairs.

You can read Dachshund’s musical evolution in his productions and DJ sets, like reading a person’s age by the marks on his face. His past history with Dub and other organic types of music is what gives his current production such an original flavor – far from the dehumanized and cold musical productions that can be so easily done with today’s software. Dachshund calls for a human presence behind the machine, sweat on the dancefloor and the swinging of hips – not headbanging. It’s with this particular vision in mind that he has played live and DJ sets all over Europe. Being a rather prolific producer, Dachshund has released tracks on various imprints – his release of “somehow” on Num records was his first international success (Num records 014).

Being a man of heart, he started a new project this year based on his friendship with renowned producer Quenum. Their new label, CLAPPER, will allow them the freedom to release music with complete spontaneity. Based on an open approach and a taste for what is unpretentious yet complex, their musical kinship has a preference for groovy music crafted under the influence of emotions, not fashion.