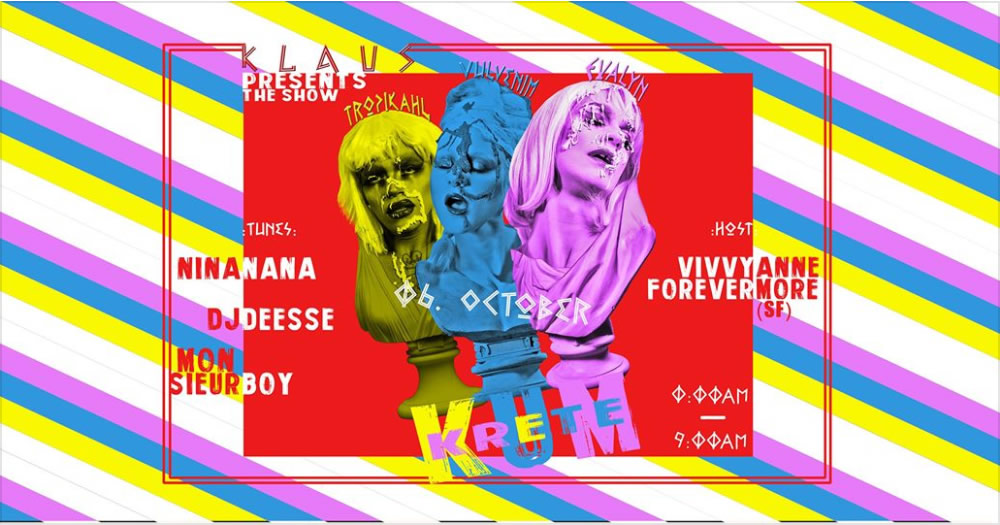 The House Of Kumkrete takes over Klaus for a night of FIERCE drag, COSMICAL debauchery and SEXXXY techno house!

After a huge buzz at The Superball Amsterdam – the biggest drag competition in Europe – the trio and their friends, wanna give back to the community who helped them get to Amsterdam and are following their steps since day one.

Wannabe Divas, Night Ghouls, Queer Dolls, Klub Kids, Drag Kings and Queens, Dissidents, Ascendents, Suns, Moons and all the Stars that glow in the dark within the Zurich underground
party scene: Get together for this one!! Tropikahl Pussy, VulVenim and Evalyn Eatdith are in heat to give you LOADS of KUMkrete and feed all your hungry holes.

NO NAME ON THE LIST MEANS NO ENTRY!!
So, please honey, avoid this by sending your sweet name to: houseofkumkrete@gmail.com

On stage and at the turning tables, KUMKRETE proudly presents:

Our Host from overseas: VivvyAnne ForeverMORE
Vivvy has been performing and hosting parties like the legendary Club SOME THING and Grand Opening in San Francisco since 2008. She is a co-owner of the legendary Stud Bar which opened 3 years before Stonewall and has been home to the fiercest parties and queens.

DJ DEESSE & MONSIEUR BOY aka Daniel Spizzi and Olivier Alain Hernikat
Like Batman and Robin, Thelma and Louise, or a mixture of both, Deesse and Boy have been turning tables at queer parties all around Switzerland since the beginning of gay times. Bringing
the KUNT to KUMKRETE, they will make you sweat glitter and dance till you faint in the queer limbo, where you all belong!

DJ Nina Nana
We bring you the finest from Geneva. The supreme ruler of the Seven Queer Seas, The Pirate Empress of the French-Swiss underground ocean. The Dilettante, Militante, DJette Dissidente, Cheap Design Queer. Queen of GENEVEGAS, NINA NANAAAAAAAHHHH!

And of course, overLOADING the stage, the one and only holy nymphs founders of the House Of Kumkrete will bring you their drag shows and performances fresh from Amsterdam:

Evalyn Eatdith
Is Zurich’s most current dancing queen on the scene. Her drag is fun, fain and fierce.

Tropikahl Pussy
Is a raw force of Nature. She has the grit and balls to take over the world by storm – Tropical Storm!

VULVENIM aka Valérie Reding
Is an asexy, seductive, poisonous, ever-transforming, gender-fucking witch from the Alps.